2006 will be over in less than 50 hours from now on. And as the year approches to its end its time to start another countdown is on my blog. :).
For me, the best way to celebrate the year end with my blogging pals has always been related with sharing of my favourite songs of the past 12 months.
In 2005 it was Khul Ke Muskura De Tu from Phir Milenge .
&
In 2006 it was Ratiyaan Andhiyari Ratiyaan from Parineeta which stole my heart.
So what will happen in 2007.....
Its a call to all my music pals to come & join me at Ek Shaam Mere Naam for this year Top 25 countdown.
Posted by Manish Kumar at 8:57 AM 5 comments:

One Night @ the Call Center 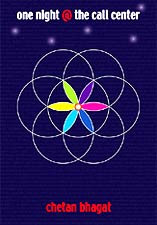 I read this book a few months back. I was not sure whether I should write about the book which has already been read by most of my friends & fellow citizens a long time ago. :)

It is really difficult to wear an altogether different mask in terms of accent & behaviour while talking to your customers. All this for a job, which is reasonably well paid, but gives no creative satisfaction.

As usual Chetan’s writing style keeps your interest alive. Side by side the main story he has also highlighted how career of a sincere and hardworking employee can go haywire while working under a whimsical & selfish boss.

Unlike Five Point Someone the book has no nostalgic effect on me since I have never come across any call center guy in my life. Only they can tell how truly this story resembles with the real life situation. But as an outsider if some one wants to peep into the lives of this community one should read this book.
Posted by Manish Kumar at 9:38 AM 4 comments: