Wishing u a wonderful B’Day dear :)!

Though Chutki joined our favourite forum a year ago! It was only in last six months I came to know her personally.
So Chutki I want to take u back to the days when u joined Bahas!
After reading ur initial sharings I could gather that u have similar taste of poetry as ours..
And within few days u became such a fan of DON that one day DON asked me

I told her that I don’t think so because the type & content of her poems suggests something else! ;)

At your age I could never dreamt of organizing my thoughts in such a nice way! I hope that u will always give some time to ur hobby to hone it further as u grow up!

What else I like about u ?
Hmmmmm u know that isn’t it ?

But I always choose B’days to express what I sincerely feel abt my frens..so to the extent of repeating myself let me list them out again
Ur sincerity towards studies,
The faith u show in ur frens &
Grt sense of humor u have !

Keep these virtues and u will never be short of frens !

No body can forget about her Alma Mater In fact most of the questions in this section are related to my engg. days. I came out from my college as a diff person.
I hope all of u will score much more in this section than previous one

I plan to give answers of all the 50 questions after u have gone through them.
So one can post reply to any section anytime even if he/she has joined later on. So here I start again


21. I have written poems only twice in my life the first one was when I was in
A.) Class III
B.) Class Xth
C.) Class XII
D.) After doing my Engg

22. In my first year in engineering the most dreaded subject for me was
A.) Engg. Drawing
B.) Engineering Mechanics
C.) Engg. Chemistry
D.) Physics

24.I did my BE from BIT Mesra. It brought certain drastic changes in my nature & thinking. Which one of the following is incorrect about me

25. Though I was introduced to various form of music in my college. The one, which influenced me, the most was
A.) Western Pop
B.) Indian classical
C.) Hindi film music
D.) Ghazals

26. One fine morning our computer teacher was changed without any prior knowledge. In place of a Khoosat prof a young maam came to teach us ! Her first class finished with pin drop silence as every one was too surprised to react! Her class was weekly so find the incorrect statement which happened during next week

A.) Everybody studied current chapter & some more before her next class so that any chance to impress her should not be missed.
B.) It was decided that everybody will reach 15 minutes late & then see what is going to be her reaction ?
C.) Just prior to her class i.e just after lunch all the bathrooms of the hostel were packed to capacity.
D.) None of the Above

27.Which game I played the most in my Hostel life
A.) Cricket
B.) Badminton
C.) TT
D.) Playing Cards

28.How many girls I really flirted with during my Engineering days
A.) Nil
B.) One
C.) Two
D.) Lost count

29.One of the thing which I tried desperately to increase in those 4 years without any success was
A.) Memory Power
B.) Weight
C.) No. of GF’s
D.) GPA (Grading percentage)

11. When I was in class I–a fellow student whose seat was adjacent to me lost 50 paise coin. She thought that I have taken it so she told me to say Vidya Kasam (taking oath by the name of lordesss Sarswati ! figure out what I have done then?

A.) I refused becoz I have taken it.
B.) I lied & gladly took that oath . Then during tiffin time straight way went to pheriwala (street hawker) to buy some Churan (spicy mixture) from that money. :)
C.) Though I have not taken the money I still refused to take that oath becoz I was angry with her that she has no faith in me.
D.) I have not taken the money but still to avoid fight gave her from my own pocket money.

12 Single out the fact, which is incorrect about my childhood school I-IIdays
A.) I was a front bencher
B.) I always figured in top 10 during examination.
C.) Boys of the class bullied me so I was protected by bunch of girls who also included me in their games.
D.) None of the above
13 From class III to V I studied in a different school which was coed. Identify the correct statement out of these
A.) I was extremely naughty child of the class.
B.) I regularly exchanged homework copies with fellow classmates of opposite half
C.) I was in awe of my class topper who was a short stature, dark girl with beautiful eyes.
D.) All of the above
14 In our sports class only game we played was soccer. I being a lazy athlete always stood near opposite goalpost in the offside position. Imagine how many goals have I scored during my school days in 5 years ?
A.) One
B.) Nil
C.) Six
D.) Two

15 Apart from Maths another subject which was my favourite in school was..?
A.) Science
B.) Hindi
C.) Civics
D.) History

16 In my school days I wanted to become……one day
A.) Scientist
B.) Teacher
C.) Cricket Commentator
D.) Musician
17 Till High School
A.) I was an introvert child having few friends
B.) I had a habit of playing alone and talking to myself.
C.) I used to fight with my both elder sis with kicks and what not!
D.) All the above

19 It was in class IX th that my classmates decided to bunk classes to see an adult movie. I also joined them & came out of school. All my friends boarded the bus but I changed my mind at last moment remembering mom’s advice. Guess which movie was that?
A. Ram Teri Ganga Maili
B. Insaaf ka tarazu
C. Blue Lagoon
D. Blame it on RIO

20 From class VII to X I became topper of my class. Though I was not class monitor , my class teacher still used to take my opinion on any matter related to class. Boys of my class wanted to go in annual fete organized by Notre dame (girls) school. As usual the question was put to me
A I told her it’s a very good idea
B. I was unable to make up my mind so advised her for to go for a vote & abide by majority decision of the class.
C. I told her that no purpose will be served by going to a girls school apart from wasting money.
D. None of the above
Posted by Manish Kumar at 12:29 PM 22 comments:

So here I am with my first section that is music & movies!
Some tips :)
Don’t overstress ur mind. Because even if u know me a bit most of the time u have to make a wild guess to answer these questions! Let’see who’s guesses are on target?

2. The only movie I have seen twice in a theatre
A. Qayamat se Qayamat Tak
B. 1942 A Love Story
C. Jo Jeeta Wahi Sikandar
D. Kal Ho Na Ho


3. Among these who is not my favourite male actor
A. Sanjeev Kumar
B. Amitabh Bachhchan
C. Shahrukh Khan
D. Aamir Khan

4. Though I admire all these actresses one of them has never been my favourite. Who is she?
A. Sri Devi
B. Madhuri Dikshit
C. Waheeda Rehmaan
D. Manisha Koirala

5. The only time my purse was pick pocketed in my life so far was when I went to see this movie. I was left with a chawanni (25 paise) in my pocket. But the movie was enjoyable and I came back home on foot humming Udit Narayan’s jadui (magical) song. Can u guess which movie was that!
A. Koi Mil Gaya
B. Qayamat se Qayamat tak
C. Darr
D. Gadar –Ek Prem Katha

6 The one song which I quote as my all time favourite & I get so emotional on singing it
A. Wo Sham Kuch Azeeb Thi from Khamoshi
B. Katra Katra Milti Hai from Izazat
C. Rimjhim Gire Sawan from Manzil
D. Dil Mein Kisi Ke Pyar Ka Jalta Hua Diya

7. The first time I sang a song in a classroom I was in class VI th. I never knew that I will become such a fan of that singer who’s song I chose. Can u tell which song it was..
A. Hum ko man ki shakti dena man vijay karein
B. Mere Mehboob Qayamat Hogi
C. Hothon se choo lo tum mera geet amar kar do
D. Chala Jata hoon kisi ki dhun mein dhadakte dil se tarane liye

8. I like a movie when
A. It makes me think or laugh
B. It can be seen with whole family
C. It gives u the impression that brain is not necessary part of our body :).
D. All the above

9. Singing gives me lots of pleasure especially when
A. I am sad & lonely
B. I am in a playful mood
C. When my compete family gets together
D. All of the above

10. I will not love to go on date with
A. Dia Mirza
B. Ashwarya Roy
C. Kareena Kapoor
D. Konkana Sen Sharma
Posted by Manish Kumar at 11:56 AM 28 comments:

Want to know about me then lets get Quizzical

So nothing extraordinary happening in life
Work work & more work….:(
How to keep this blog alive?
So I thought to get Quizzical .

I invite all my blog frens participate in this new quiz, it will help u to know me better. And in this question and answer mode it will be more entertaining for me & u too!
The quiz will be in different section.. All u have to do is to reply with question no & the corresponding option. Every correct answer will fetch u two marks. Results will be shown on my TAG BOX after completion of each section .

And overall topper will be suitably rewarded *
I am putting all the questions on the blog instead of a web site to avoid cheating :) hee hee

Lets Get a bit Mathematical

Do you think Mathematics can solve ur day to day problem!
U don't think so!
Go through this proof.....
he he :)
and chances are that if u r from male species u will identify the root cause of the problem :) 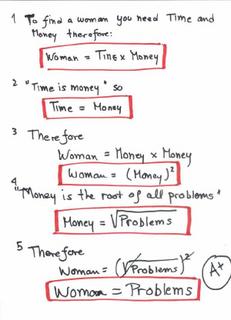