World Cup Soccer 2006 : Did it live up to our expectations? 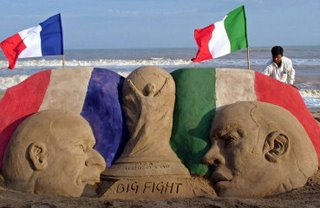 It's Written in the SandIndian sand artist Sudarshan Patnaik adds the finishing touches to his sand sculptures of Italian captain Fabio Cannavaro (R) and French captain, Zinedine Zidane at the Golden beach in Puri, east of the Indian city of Orissa, July 8, 2006.

World Cup will finish tonight. There were some spectacular goals scored in the tournament. But all in all this World Cup will have fewer memorable moments than its previous editions. Records were created, though mostly on negative note. Apart from goals scored from maximum no. of passes (Argentina did it first & then it was improved upon by Brazil) the other things which I can remember about this cup are...

If that was not enough, Asian teams especially Korea & Japan performed below par. With their elimination in earlier rounds thise time, one can conclude that home advantage in World Cup means assistance from referee. With so many controversies happening in every world cup why can't FIFA use Ultra slow motions to decide off-sides & infringement inside the penalty area to start with?

The only bright side was good showing by African countries such as Ghana & Ivory Coast. Hope with experience they can challenge hegemony of European & Latin American countries in years to come.

As for the question where our own country stands viz to viz qualification for the World Cup, I have this post लो जी मन्ने कर दिया गोल ! to offer which I wrote on my Hindi Blog.

I guess all points that I considered you have covered and that says a lot ! Similar thought process were going in my mind too...after such a big event...!
I didnt see any celebration or even talk of it @ work....
Good post
Cheers

I hope u and ur friends r SAFE.

KL Hope u come out of this spell soon!


Keshi Its a heavy price to pay for those who live in Metros. Thx god none of my frens bore the brunt of the tragedy.

I didn't really follow the World Cup. The only match that I saw in it's entirity was the one between the US and Czech Republic, and a few highlights from other matches.
But I was as shocked as most people were when Brazil got knocked out of the competition!
I have been seeing the ads on Zee TV about India playing in the next World Cup. I wonder if that will ever happen!

good to hear ur safe. yep it was a senseless tragedy..what a waste of so many lives.


Manish the only thing that got me watching WC for was the hunks :)

PR I was happy to see Brazil out becoz the way they played thru out they didn't deserved it.

Keshi Who was ur fav hunk from the tournament :) ?

Soccer Live Matches At Your Desktop
There are thousands of High Quality Channels streaming live football from around the world. We are here to show you how to

matches are as per BST.

Special Introductory offer:
Live match links in your mail account at only £1.00 GBP. Free for First Day if you subscribe it now.

1. Free Software:
We will provide you all software you need to get live match at your desktop.

3. What's Needed:
Just need is to click on the link, start the software and match is on your desktop.

3. Live Soccer:
Watch live soccer online on your PC no need of buying Sky or Cable?

4. Is It Legal?
We donot stream live football from this server or blog. There are thousands of High Quality Channels streaming live football

from around the world. We are here to show you how to find them.

Check it Once
Soccer Live Matches At Your Desktop