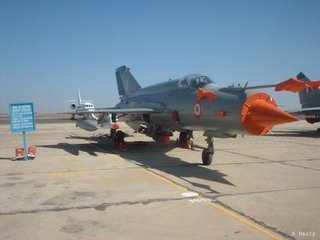 Last week after long long time I went to see the movie Rang De Basanti in a hall. There was a freshness in the way the story was narrated. Though the climax was a bit too dramatic to my liking. But then issue raised in the movie was too close to my heart i.e. frequent accidents of our MIG 21 fleet over the years. This question was hovering from long time in my mind but the movie again forced me to ponder why such a thing is happening in this free democratic India? What are the issues involved & who is to blame? And here what I found out ....

THE POINT :Losses of IAF Fighter planes/Pilots Alarming, May 2001
It has become a routine to read the news regarding MiG 21s crashes quite frequently. The worst accidents are that the fighter pilots do not even get a chance to bail out which facility all the fighter planes have. Recently we lost another MiG 21 near Tezpur when it had just taken off and was piloted by Squadron Leader Ram a qualified flying instructor (QFI). This cannot be attributed to a pilots’ error, because this has been piloted by a qualified instructor. Each pilot costs to the IAF Rs 44 crore and a MiG costs about Rs 100 crore. Why are we playing with the lives of the fighter pilots by forcing them to fly obsolete aircrafts is not understood.........
The loss of more than Rs 900 crore to the exchequer for the crash of fighter planes of the Indian Air Force (IAF) in accidents are not only alarming but also worrisome for the country as well as for the IAF. The IAF has lost about 92 fighter aircrafts, most of them ageing MiG 21’s, in air accidents in the last five years.........
To read further Click Here.
COUNTERPOINT : MiG-21: Much Maligned! July 2002
The media gets overexcited whenever there is an accident involving a MiG aircraft of the IAF. There is surely cause for concern for the number of accidents that plague IAF. But all MiG types are labeled "flying coffins" or "widow makers" without bothering to see if common causes or versions of the aircraft are involved. Most often the headlines read, another “MiG-21 crashes -….” Very recently, an accident involving MiG-23 in Rajasthan sector was reported as that of MiG-21.
It is also not realized that over the last several decades, accident rates have come down dramatically. This gives the false impression that fight safety is being compromised more than ever before.
It is fashionable to allege that MiG-21s are getting old and hence more prone to accidents. MiG-21s are the mainstay of IAF fighter fleet and are flown for the maximum amount of hours. In the words of previous CAS, Air Chief Marshal AY Tipnis, “MiG-21s are most in numbers and in use operationally”. PAC had observed that, in the last decade, 62% of IAF accidents had occurred on the MiG-21. It is seen that the accident rates are in proportion to the fleet strength of MiG-21s, which constitutes 60 % of IAF fighter strength. Infact, the accident rates of the MiG-23 and MiG-27 are higher than that of the MiG-21.
To read further Click Here
AND THE STORY CONTINUES........
12th MARCH 2005. The Defence Ministry has constituted another experts committee to recommend measures to check the increasing number of MiG-21 crashes As many as 161 pilots had lost their lives in 321 MiG crashes in the country in the last few years. ``We are trying to make them usable. We will have to improve the standards of training. The accidents are bad. When it snuffs out lives of young IAF personnel it is much more,'' he said.
14th December 2005 MiG crashes in Assam, pilot safe (PTI) Guwahati, December 13: In the fourth crash of the MiG fighter aircraft series this year, an IAF MiG-21 today went down near the Tezpur airbase in Assam but the pilot managed to eject safely. Squadron Leader S Bansal, who was piloting the aircraft, managed to eject safely. A court of inquiry had been ordered in this regard.
What the youth of our country could do in such a situation? What's ur take on the issue?
Posted by Manish Kumar at 8:52 AM

And I must watch Rang de basanti now...goshh so many bloggers talkin abt it!

I have read this many times in news and I always thought it was the technical fault...but its a good insight tht u posted...

hmmmm it has definitely a different feel keshi

All due to corruption and negligience, I should guess. If the ministers or the top brass of the army had to fly those Migs, you wouldn't see things (of Migs getting old and thus crashing killing the pilot as well) ignored.

Can you please send me your email address? All my mails from yahoo got deleted and thus I lost all my precious mails from all my friends and their addresses as well. :(

wow! is that an indian fighter jet?

as u can see in the counterpoint KL people are also saying that there is nothing wrong with MIG 21. though its hard to belief such stuff.

You know, I hadn't even heard about these MiG crashes before I'd seen 'Rand De Basanti'. That's how well-informed I'm!
But I hope the government looks into this matter at least now.

ohh really PR! Anyway u r a busy student ! Hey but look what u have done by changing the name of the movie :) :)