With love to M S Dhoni ! 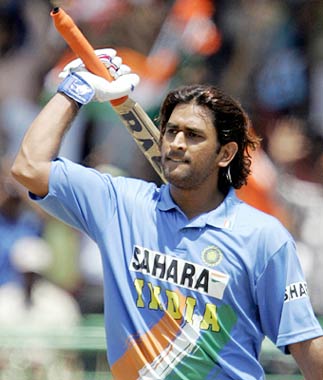 Its a day of pride for every Ranchite.:) more so for people of Shyamli where he grew up. Today my blog salutes Mahendra Singh Dhoni not only because the way he has played for his country in past few months but for fighting the odds heavily loaded against him.
Imagine a guy coming from a lower middle class family...
residing in a state which even finds difficult to beat cricket minnows like Assam...
becomes the top player in the world international cricket ranking by playing just 50 odd one day matches a feat even not acheived by the great Sachin Tendulkar !
Some info about MS Dhoni
Starting his sports career as a goalkeeper in school, the Ranchi lad's keeping skills between the posts had prompted the coach to ask him to don the keeping gloves of cricket and the rest is history. What was soccer's loss turned out to be cricket's gain?
"He was a good football goalkeeper during school days. In one of the cricket matches he was asked to keep the wickets. He allowed only four byes," cricket coach Chanchal Bhattacharya said.
Agreeing with Bhattacharya, Dhoni's father Pan Singh said: "My son used to play as a goalkeeper in colony football matches. He switched over to cricket after he was asked by the coach."
The 23-year-old Dhoni's exulting stroke play reminds the old-timers of another wicketkeeper-opener of Bihar Daljit Singh, who had displayed free stroke making in 1960-70.
Dhoni, the first international cricketer from Jharkhand is also the latest from the undivided Bihar which has produced players like Saba Karim, another wicketkeeper, Subroto Banerjee, Ramesh Sexana and Randhir Singh.
A student of DAV School and now in the Gosnar College, Dhoni, who had set ablaze the Visakhapatnam stadium with a scintillating 123-ball 148, is a good student too. RE Singh, the former principal of DAV Shyamali where Dhoni was a student, said right from the school days, he was sincere and hard working. Dhoni's father said he has always encouraged his son and never interfered in his goals.
Bhattacharya said Dhoni's fireworks had started in the first class cricket a couple of years ago, mesmerising the likes of pacemen Venkatesh Prasad, Doda Ganesh and spinner Sunil Joshi of Karnataka who were in Ranchi to play Ranji Trophy match.
##########################################
Wish u all the best Dhoni. I hope u will remain the humble person and play sensible cricket unfazed by the hype that is going to surround u in a cricket crazy nation like India.
Posted by Manish Kumar at 11:05 AM

Do you know him personally? Yeah, hope he remains humble and much hype and limelight doesn't take away his attention from cricket.

Since the days of quiz time in ur this section...I always thought when would u be writing about him :D...and am glad to see him here ...awesome dost!

great post manishji about MS Dhoni.congratulations to Dhoni for overtaking Ponting as No.1 batsman in ICC ratings.

he has been a great find for india and long search for a wk batsman has ended finally.He has come a long way ,came into limelite with Vizag century and played some great knocks in subsquent matches to become No. 1 today.

Its not easy to climb to such heights so early in career especially when u come from a place where u dont have excellent facilities for cricket.But Hats off to dhoni the way he fought and hope he continues to play excellent cricket.what i like most about dhoni is he can play at any position and in any situation with same ease that whats makes him a great cricketer and different from others.I think thats where great cricketers gets differentiated from ordinary cricketers.

well done MS dhoni whole country is proud of you.

Good to have some info on MS Dhoni, the new poster boy of Indian sports. I just knew him as this hot looking dude! ;)
I'm not a cricket fan at all, but I hope he does even better in the future.

KL No I don't know him personally. I only saw him playing against Karnataka when that ranji Match was played in nearby MECON stadium.

DON Now he truly deserves it thats y I am writing abt him :)
As Ajay Jadeja was saying the other day Dhoni has limited ability in comparision to other cricketing heroes of our country but great will power & determination to succeed. The great thing about his success is that it has coincided with India's rising fortune in one day cricket.
And I think one's contribution shd always be measured in terms of teams success.

Nagu U have echoed my feelings.:) Dhoni has still lot to prove specially maintaining his form on seaming and bouncy pitches of SA & Australia against a quality pace attack. I hope with his determination he will be able to conquer that challange.

PR Hmmm hot looking dude who prefers milk rather than beer :).
These days he is getting marriage proposals in heaps. With such address line on envelopes
to M.S.Dhoni, Ranchi for marriage :)

He is Wicketkeeper in cureent indian cricket team & lives in the vicinity of my office :).
Btw do u like cricket Keshi?

I LOVE CRICKET..but only when India/SL/Aus are playing gainst each other :)

EAST OR WEST DHONI IS THE BEST

team.1 Under his captaincy, India won the 2007 ICC World Twenty20.Dhoni got his big

break in the Indian team courtesy his exploits against Pakistan.
Please Visit For Deatail
http://desidirectory.com/desi-indian-blogs/

yes indeed he needs a salute for his unbelievable team work and fun loving attitude....he is an incredible player...i am crazy bout him since 2004

Rupika:(a.p)
Actually I love soccer. But I watch cricket when there is a match between Ind and Pak.I like his bating.Being a Badminton and football player to reach a high position in cricket is difficult.but he is a person who did it and he had lots of attention on the game.

hi dhoni!
wish u happy birthday
i want to meet u
this is13yr old anushka